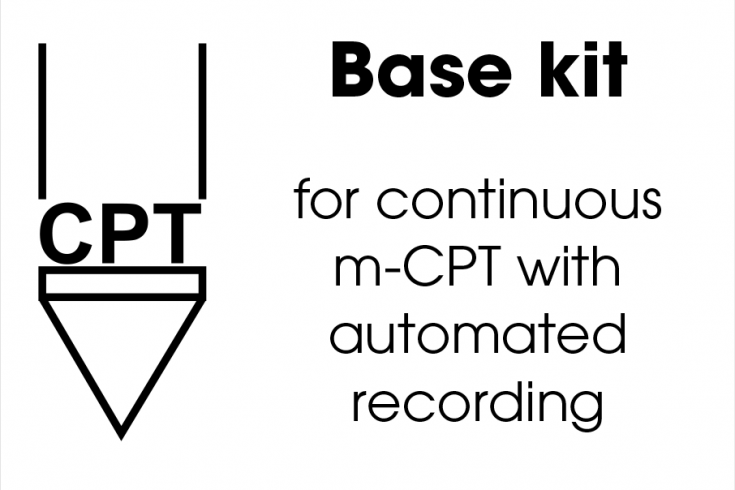 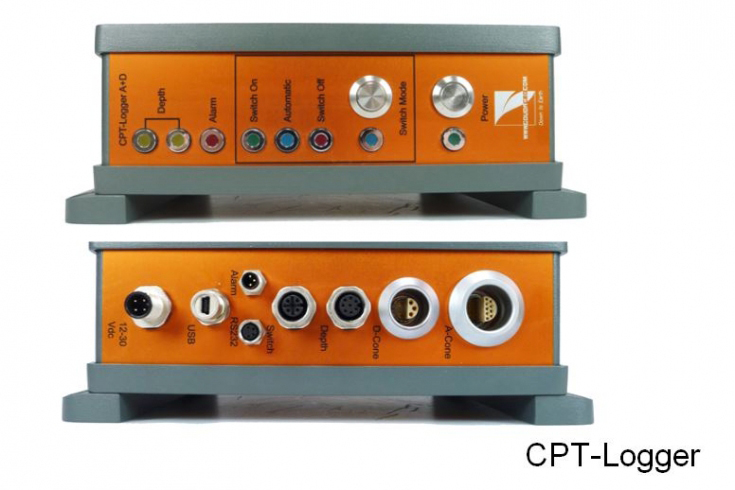 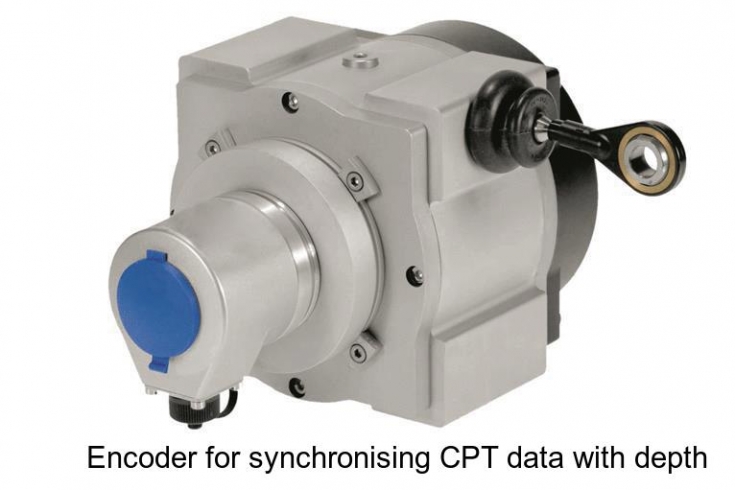 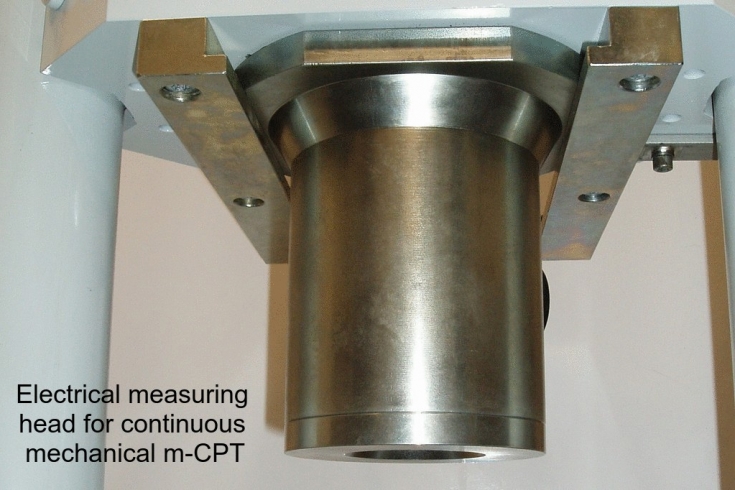 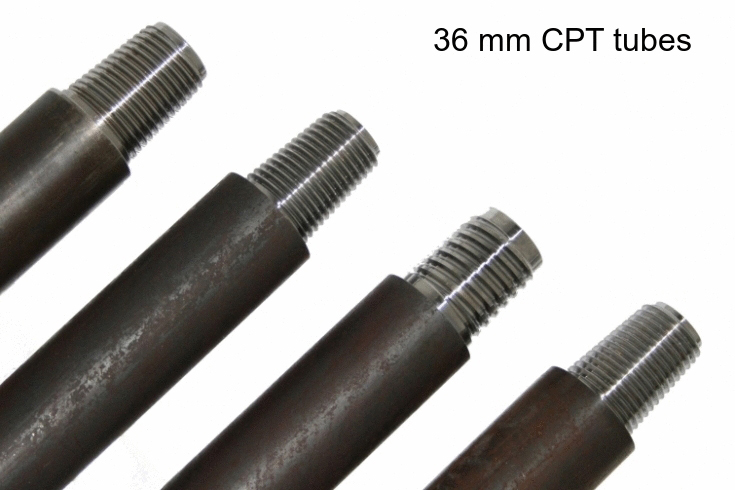 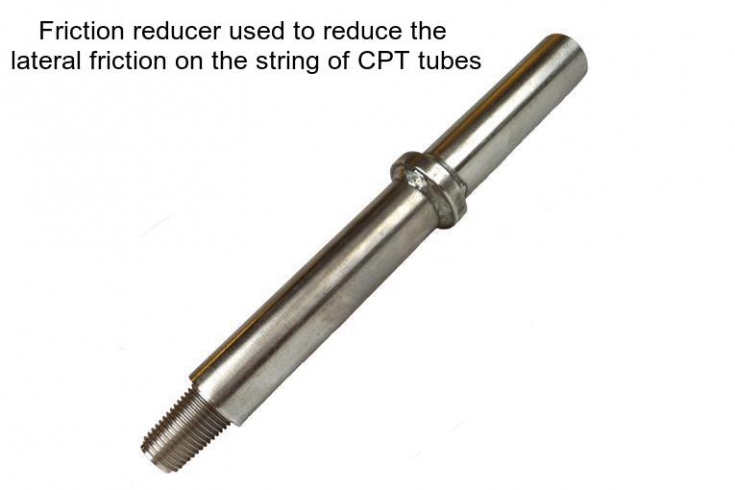 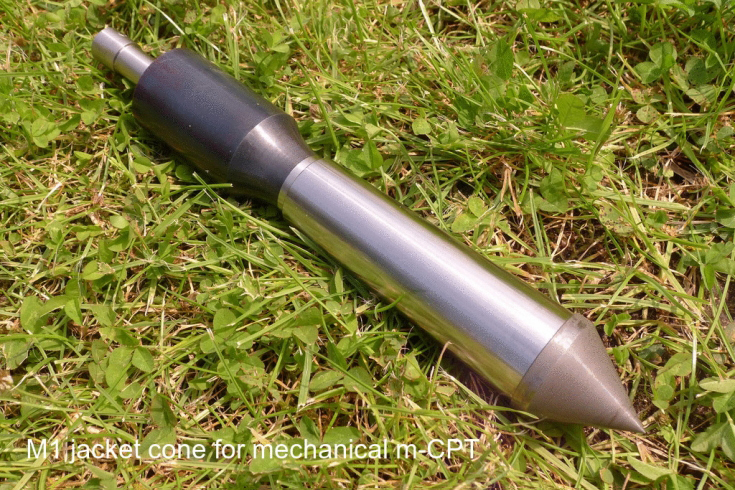 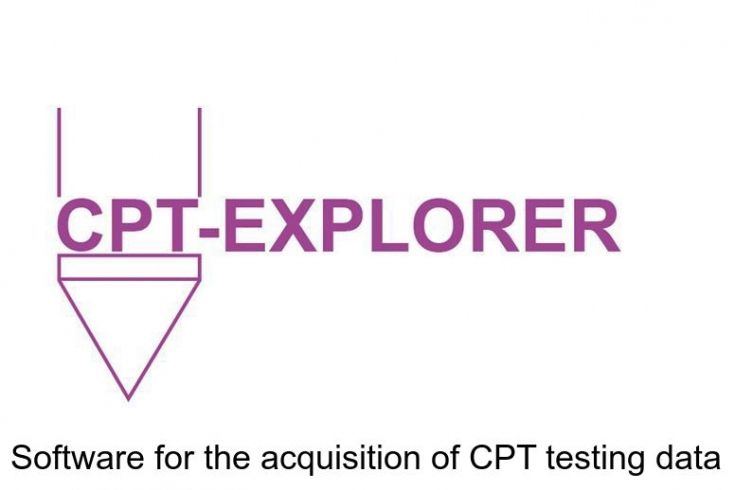 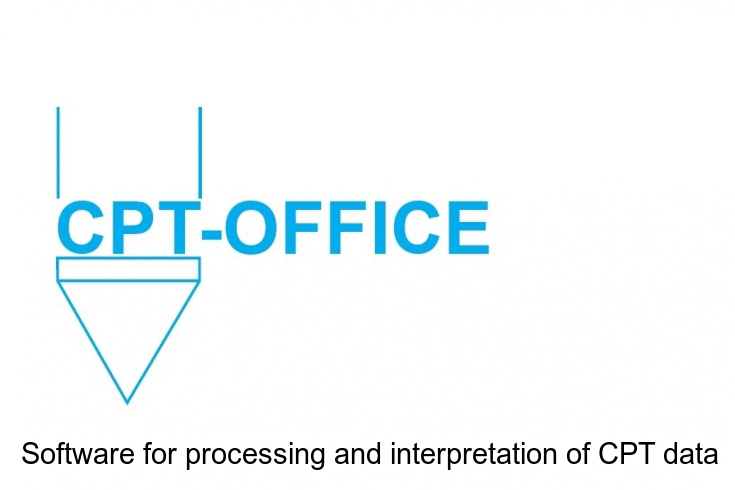 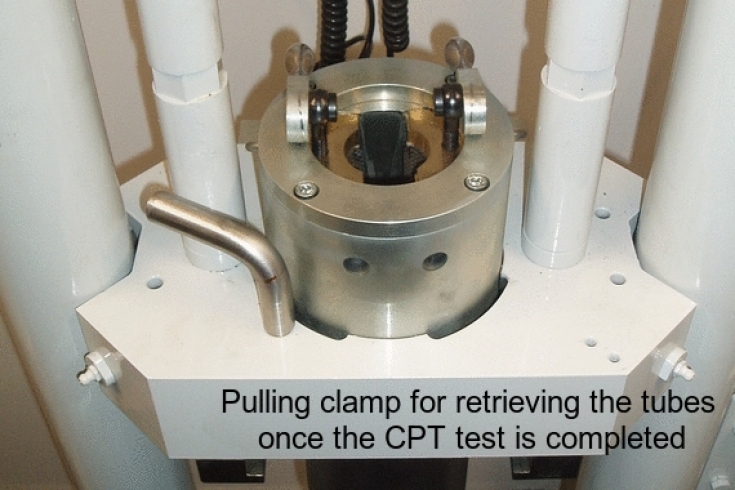 In the quotations Gouda-Geo issues a clear distinction is made between on one hand the CPT penetrometer pusher (this could either be a << truck-based >>, << crawler-based >>, << trailer-based >> or << stand-alone >> unit) and on the other hand the CPT system (this could either be mechanical or electrical CPT(U) system with automated or manual recording). This page describes the base kit one would need to do continuous mechanical CPT tests with automated recording of the CPT data in combination with a CPT penetrometer pusher of one’s choice.

Continuous mechanical CPT testing with automated recording of the CPT data offers the opportunity to measure simultaneously the cone resistance (qc) and the total friction (ft) at 1 cm intervals. All data are synchronised with depth.

For the performance of continuous mechanical CPT tests Gouda-Geo offers a complete and universal system to do these tests according to << national and international standards >>. It is to be used in combination with a PC computer and can be used on any penetrometer pusher.

The base kit consists of the following components:

The CPT-Logger is the heart of the data acquisition system for CPT(U) testing. It is to be used in combination with a standard laptop or << industrial computer >> and << CPT-Explorer data acquisition software >>.

The CPT-Logger combines the following functions:

The CPT-Logger is compatible with both continuous and discontinuous electrical measuring heads and all compression and subtraction type electrical CPT cones. The high-grade waterproof housing makes the unit extremely suitable for working in the field, its compact design assures the use of little space.

For synchronising the recorded CPT data with depth, an optical linear displacement encoder is required. This highly accurate device generates 10 pulses per cm and counts in 2 directions for optimum synchronisation. Comes complete with mounting bracket.

CPT-Explorer is a state-of-the-art software package specially designed for the on-site registration of Cone Penetration Testing data. It meets latest national and international standards and industry demands. Years of experience in the CPT industry make this software fulfil your demands and your wishes. CPT-Explorer is modern and versatile and based on Microsoft Windows Technology.

CPT-Explorer is easy to install and the user interface makes the CPT testing procedures clear and understandable. It can be controlled by means of the keyboard, scroll mouse, or touch-screen. It can also be used in conjunction with data acquisition equipment from other manufacturers. The user-interface language is available in both English and Dutch. French language will be available soon.

CPT-Explorer is a software package that will be purchased; so you don’t have to pay any annual license fee. The software is constantly updated and updates will be send to its users entirely free of charge.

CPT-Office is a Microsoft Windows based software package for the processing of CPT data, soil classification and the plotting of CPT test results.

The user friendly program structure is project oriented and provides, among other features, the possibility to edit project data and variables such as ground level, coordinates and water table in one simple step. Several individual CPT files or complete project files can be opened and processed simultaneously. All windows can be arranged according to the user’s preferences.

Data can be viewed as tables and graphic plots and all CPT data can be edited freely while the raw data files remain unchanged. The user can opt for various languages (e.g. English, Dutch, German and more to follow), both for the program readings and for the plot versions.

Supports practically all data import formats, including the standardised GEF format. The processed data can be exported directly to Microsoft Excel or as ASCII, PDF and JPEG format.

An << electric measuring head >> is a << calibrated >> high-precision measuring instrument and enables the automated logging of mechanically measured CPT data. In the present lay-out it was specifically designed for continuous mechanical CPT testing and can therefore only be used in combination with a mechanical << jacket cone >>. The strain gauges (sensors) of the measuring head measure the cone resistance (qc) and the total friction (ft). All parameters are measured continuously and simultaneously.

The output signal from the electric measuring head is a voltage signal. It is amplified in the head itself and transferred to the CPT-Logger datalogger where the analogue signal is converted into a digital signal. The digital signal is then sent to a computer for recording and further processing.

The electric measuring head allows to push in << CPT sounding tubes >> with a diameter of 36 mm along with << inner rods >>, and a mechanical jacket cone.

The mounting and positioning of the measuring head is really straightforward. It fits in a slide rail mounted underneath the push-and-pull yoke of the << penetrometer pusher >>. The electric measuring head is in accordance with the relevant << national and international standards >>.

We recommend jacket cones with the same thread as the << CPT sounding tubes >>; in that case no cross-over tube is required.

When doing mechanical CPT tests, the  << CPT sounding tubes >> are pushed into the soil by means of a << hydraulic >> or << electrical measuring head >>. At the end of each test traditionally the tubes are pulled up by means of a << manual pulling kit >> (pulling bowl with pulling piece). The biggest disadvantage of such a pulling kit is the fact that working with it is quite laborious. To overcome this disadvantage Gouda-Geo developed a pulling clamp. This pulling clamp is suitable for 36 mm CPT sounding tubes, has a pulling capacity of 260 kN and locks in the yoke of a << 100 kN >> as well as a << 200 kN penetrometer pusher >>.

CPT sounding tubes are used to push the electric cone into the ground by means of a CPT penetrometer pusher. Gouda-Geo CPT sounding tubes meet the highest quality standards. The tube
material is manufactured by one of Europe’s leading steel manufacturers according to our own
standards. No distinction whatsoever is made between tubes for 100 kN and 200 kN testing. All tubes are suitable for any pushing force and for any type of CPT test.

During production every single tube is checked automatically by means of sensors integrated in the lathe machine in order to comply with all national and international standards.

Gouda-Geo CPT sounding tubes are available with either standard (STD) tapered thread, quick-lock (QLK) double-entry rope thread, AR tapered rope thread and 2R tapered rope thread. Because of its superior characteristics, we recommend CPT sounding tubes with quick-lock (QLK) double-entry rope thread. The main advantages are the number of turns required to lock / unlock (only 2.5 turns), the improved strength of the thread (over 40% stronger than the standard tapered thread) and the relative ease to clean it.

For mechanical CPT testing so-called << inner rods >> (15 x 1000 mm) are required. The key characteristic of mechanical CPT testing is the fact that the reaction forces encountered by the cone are transferred to the measuring head by means of these inner rods. These rods can move freely without any obstruction inside the << CPT sounding tubes >>. The rods are manufactured out of specially selected tool steel.

Recommendation guidelines interpret a full range of geotechnical parameters from cone penetration data and relevant examples and case histories are given throughout the text. 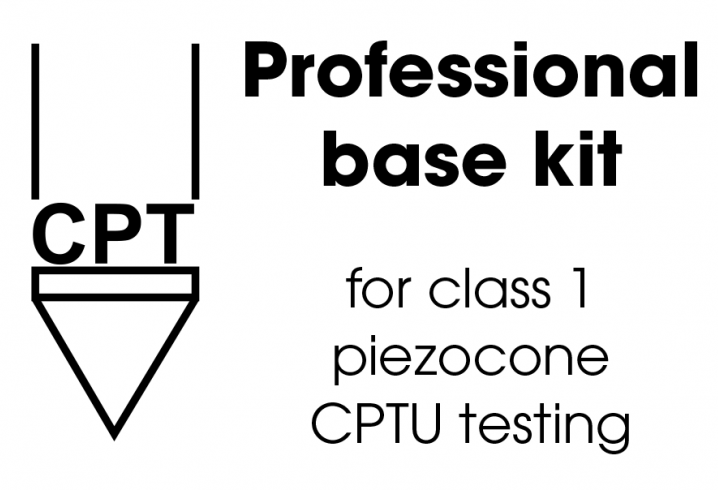 Base Kit for Piezocone CPTU (Professional) 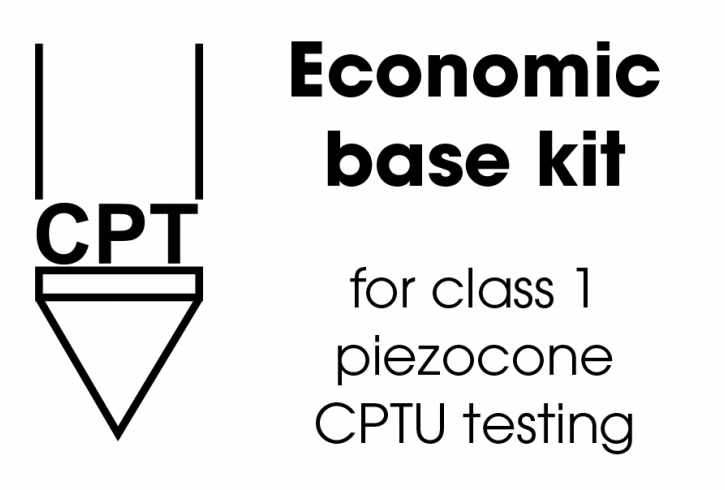 Base Kit for Piezocone CPTU (Economic) 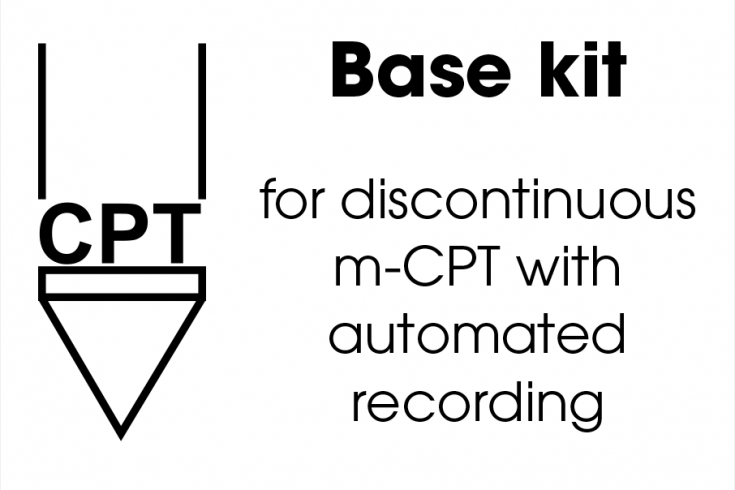 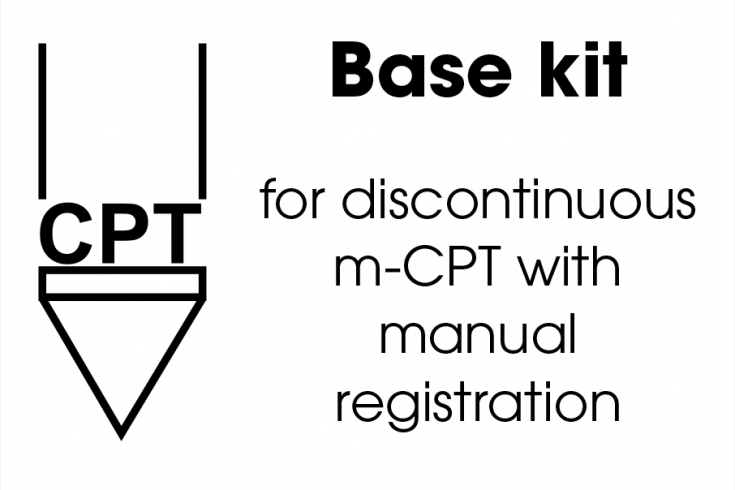