Wireless CPT is one of the most recent developments in the field of CPT testing. Cone penetration testing was originally developed for geotechnical soil investigation in order to determine the bearing capacity of the soil. Over the years this “direct push” technique proved to be suitable as well for quite some other applications. Underneath we have listed the most recent developments in CPT.

Count on our technological innovations for the most accurate CPT data

We at Gouda Geo-Equipment are proud to be one of the market-leading companies for geotechnical instruments. Count on our technological innovations to supply you with the most accurate, wireless CPT data. Contact us to learn more about the specifications of our equipment by calling (0)715 318 475 or send an email to info@gouda-geo.com. We are ready to support you with advice about our products so you can find machinery that perfectly suits your next soil investigation job.

The “direct push” capabilities of CPT are an excellent technique for rapid environmental soil investigation. The electric CPT cone can e.g. be equipped with a temperature sensor for a soil temperature profile versus depth. The CPT cone can also accommodate a dielectric and conductivity module to measure the soil salinity level, to determine the porosity of the soil, the soils’ water content and cation exchange capacity. In environmental context enable these parameters to define the preferential migration pathways for contaminants in the subsurface.

The CPT cone can also be extended with a pH / ORP module, comprising both ORP and pH sensors. ORP stands for Oxidation-Reduction Potential, pH for acidity. ORP is a measure, in millivolts, of the tendency of a chemical substance (in this case the soil) to oxidize or reduce another chemical substance (read structure in the soil, like pipelines, steel foundations and alike). pH is the measure of soil acidity or alkalinity and is inversely related to the ORP measurements. Soil ORP, in conjunction with other soil characteristics, such as electrical resistivity, is used to predict corrosion tendencies of buried metallic structures. Like pH, ORP it is not a measurement of concentration, but of the activity level.

The CPT cone can also be equipped with a fuel fluorescence detector module (FFD), which detects the fluorescence produced by aromatic hydrocarbons when excited by an ultraviolet (UV) light source. The FFD provides a continuous, real-time output of fluorescence over the entire depth of the investigation and can provide a 3D model of the contamination plume. For more environmental site characterization and groundwater monitoring activities done using CPT, please consult the book Cone Penetration Testing in Geotechnical Practice by T. Lunne e.a.

Seismic Cone Penetration Testing (SCPT or SCPTU) has proven to be a very accurate and reliable and therefore important tool in geotechnics to determine low strain in-situ compression (P) and shear (S) wave velocity profiles. The P-wave and S-waves velocities are directly related to the soil elastic constants of Poisson’s ratio, shear modulus, bulk modulus and Young’s modulus. The accurate determination of P-wave and S-wave arrival times from the recorded time series is of utmost importance to calculate reliable seismic wave velocities.

War remains and unexploded bombs and shells are becoming more and more a problem for the construction industry. Old cities are revitalized on places that were subject of extensive fighting and bombardment. The direct push technology of the CPT penetrometer pusher has proved to be a cheap and effective tool to push a magnetometer into the ground to detect and locate said remains of war.

The magnetic field is measured in 3 orthogonal directions and the resulting factor is calculated. Furthermore, a gradient of the resulting factor is computed which gives an even better indication of the changing magnetic field. Interpretation of the recorded data is not easy and requires an experienced specialist. The magnetometer has a highly sophisticated inclinometer enabling to orientate the magnetic field accurately. The magnetometer can also be used to determine the depth to which piles are driven, the length of sheet piles, the location of ground anchors, the track of high-voltage electricity cables, etc.

Soil heat exchangers are often placed to affect an energy exchange between the earth soil and an energy exchanger. It comprises of a thermo-insulated flow duct positioned vertically in the ground and a ground source heat pump provided at the end of the flow duct.

The soil heat exchangers are connected to a central heating and/or cooling system that pumps heat to or from the ground. It uses the earth as a heat source (in the winter) or as a heat sink (in the summer). This design takes advantage of the moderate temperatures in the ground to boost efficiency and reduce the operational costs of heating and cooling systems.

The direct push technology of CPT penetrometer pusher has proven to be a quick and economic device to place these soil heat exchangers. The pusher provides a pushing force up to 200 kN assuring reasonable depth. The main advantage is, is that no costly drilling is required.

Piezometer standpipes are traditionally placed using drilling techniques. It is much more efficient and economical to place these standpipes using the direct push capabilities of a wireless CPT penetrometer pushing rig.

A piezometer standpipe is a plastic tube with a perforated “filter” part and a “blind” unperforated part (called the riser tube). The piezometer standpipes make it possible to take either groundwater samples, to determine the groundwater level (i.e. the phreatic water table), to sample and to measure the thickness of floating and sink layers and / or to determine the permeability of the ground (at the height of the filter).

As space becoming more and more scarce, more projects are being developed near-shore and far-shore. In general, these are huge, economic important and risky projects, such as offshore windmill parks. These projects require the best and most accurate soil investigation technique available. Cone penetration testing has proved to be suitable for these circumstances as well and has been adapted to meet the demanding and hazardous requirements of nearshore cone penetration testing (also referred to as over-water or marine CPT). Nearshore CPT can either be done from a jack-up working platform or a floating barge, directly from the seabed or from within a string of drill-pipes (Down-the-Hole CPT).

Since more and more constructions will be built on building lands with less favorable underground conditions or are to be founded at much greater depths because of the sheer size of the construction or will be realized nearshore, the traditional cone penetration testing methods, that can only reach limited testing depths, are no longer sufficient. For this reason, there is quite a demand for CPT testing methods combined with drilling techniques.

CPT testing devices have been developed to perform CPT tests from within a string of drill pipes. The most common CPT technique is done as following; a drill pipe is placed and first a CPT pushing device is lowered, that hooks itself in the shoe of the drill pipe and performs a CPT test. After having completed the test, the device is hoisted back to the surface and the hole will be advanced using classic drilling techniques up to the testing depth that was reached with the CPT pushing device. Then the whole cycle is repeated over and over again until the ultimate testing depth is reached.

Continuous pushing results in a steady progress of the CPT cone without any interruptions. Greater test depths are achieved with the same pushing force, and some claim the quality of the CPT test performed is better.

Wireless or cordless transmission of the CPT data to the surface is still the “holy grail” of the CPT industry. Traditionally the CPT data are transmitted to the surface by means of CPT sounding cables. Handling both the CPT sounding tubes and the cables makes CPT testing complex and tends to slow down the testing procedures. Wireless CPT data transmission seems the obvious solution but has its own problems.

Over the last years 3 different wireless data transmission systems have been developed by the industry, i.e.:

Neither of above-mentioned systems are a good alternative for “cabled” CPT testing. The optical system is expensive and vulnerable. Quite a number of truly expensive components are pushed into the soil with the risk of losing them. The data transmission capacity of the acoustic system is very limited, and the signal is compromised when penetrating e.g. sand or gravely layers. The high frequency system is very vulnerable for water entering the CPT sounding tubes killing the signal entirely.

Gouda Geo-Equipment is at this moment developing a fully digital and most reliable wireless CPT system not having any of above-mentioned problems. Please consult the News section regularly for an update on this development.

The wireless or cordless transmission of the CPT data makes it possible to have the CPT sounding tubes handled and placed automatically without any intervention of the CPT operator. This makes the CPT testing procedures much easier, quicker and safer. The sounding tubes are then placed and removed automatically and penetrate the soil, when combined with a continuous penetrometer pusher, continuously without any stops.

Where standard electrical CPT (piezo-)cones have had an external diameter of 36 mm for the last decades, the international standards also allow cones with another diameter. An obvious tendency in the CPT industry is the use of 15 cm² cones instead of 10 cm² cones. The 15 cm² cones (OD = 44 mm) are much stronger than the 10 cm² cones and because of the fact that the cone act as its own friction reducer many CPT operators claim that greater depths are reached using these 15 cm² cones. 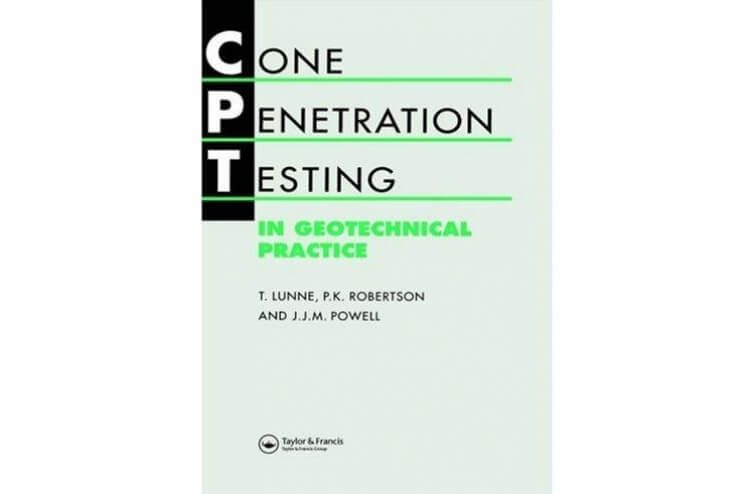